Lounge chairs procured from some noble’s parlour in Eastern Europe; a globe taken from Vermeer’s the Geographer; a beer list crafted by a pretentious guy with a graphic T-shirt and suspenders, bocce courts, a comedy club. The owners must’ve been like, ‘let’s create a chill bar, yea a chill bar, but on any given night–shit can go down.’ Politics as usual in BK, and at Union Hall, the choose-your-own-adventure bar.

Beyond a neighborhood haunt, since 2006, Union Hall has been a Park Slope mammoth. It was a decade later that I’d move from Seattle to Queens. No matter how far I settled, however, word would travel. Word always travels in a town without trees.

But before I wax philosophical on ya ass, let’s play some oldies. Back in the Astoria days, we had our own classics, the neighborhood bruncheries, dives, and greek on the street. Brick, stone, and metal from the suspended N train track, dozens of languages, we had it all, so, nothing else mattered. At least, nothing else should’ve mattered. Park Slope was eons away.

Those serene streets and brownstones that I’d read about in the New Yorker, that I’d overheard in conversation, that I’d seen in movies, didn’t impact my daily life whatsoever. I couldn’t delineate South Slope from North Slope from Central Slope, and Gowanus surely wasn’t a legitimate thing.

So why was it, that unknowingly, I found Union Hall.

In the summer of 2016, a friend brought me, promising a great time.  The bouncer rejected us. This incident taught me a lesson in expectations, only seconds before had the bar looked welcoming.  Through the glass windows, people did look happy, they were becoming champions in a one-armed sport that cultivated their knowledge of the world with each new match, while simultaneously drinking a craft beer that literally sharpened their palette as they spoke.  It’s as if you could smell the culture brew inside. Fresh culture sold here, must have ID to be a part of said culture.

Not until the following summer, after a front row viewing of Dunkirk–and my adrenaline fucking jacked–was it that I finally entered that door. I walked in, ordered a beer, and sat in a chair, but not just any chair. One of those chairs. Yeah, those chairs. The ones that you don’t sit but slide into. My chum and I happily slid into those chairs and talked about rubbish. We tried to analyze the movie. He started an anecdote as I stopped listening, and instead admired the layout of the expansive bar. 2 Bocce courts spread out in the middle of the space. A large hall downstairs for comedy shows and concerts: Ilana Glasur, Jim Gaffigan among others had performed there. So, I leave, satisfied that I’ve breathed the same air and potentially drank the same Gose/Goses (what’s the plural?) as them.

The Union fought the deadly stroller wars of 2008, which gave way to a new era for young Brooklyn, Brownstone couples. UH wouldn’t let them enter with strollers and screaming babies, and the couples retaliated with smoke and keyboards.  You can still find vehement comments on archived reviews in NYMag. Life, Liberty and Bocci, man,–petanque for parents.

I’ve never been to UH when it’s an acceptable hour for a baby to be awake, but I’d imagine old wounds run deep. Now, as a mid-20’s urbanite, I find that most of the crowd is a similar age-range, or a little older than me. I wouldn’t consider it a hipster bar, more like the bar of the one successful friend of that hipster. Because of that, I’ve never seen a rowdy scene. More like, polite conversations, theory exchanges and mingling between groups of like-minded folk.

Surprisingly, this bar all the way out in Park Slope also draws a large number of international clientele. I met a couple from the Netherlands, see plenty of French and on a later occasion bumped into two mates from Manchester. They told me ‘you go to London, I’ll tell ya six bars you can get laid. And you’re telling me, you got nowhere for me to go?’  The response to me telling them, Park Slope really isn’t that kind of neighborhood guys.

The great fire of 2016 is another reason I didn’t visit sooner. The chimney of their fireplace wasn’t irritated properly, smoke built-up, billowed, and seared signs, walls, and windows of the property.  Twas a cold winter when the embers stopped burning. And it also reinforces my theory about ‘anything’ being in the realm of possibilities. But sincerely, it was devastating, to the community, and to the Brooklyn live venue scene. A pillar of the Brooklyn comedy scene had shut-down for months.

Their beer list (7-8$) is perfect.  It’s perfect if that’s what you’re in the mood for, and that’s what you have in mind. They do, however, have cocktails for when a locally picked, Emmy nominated, hand-curated beer list isn’t perfect enough for you! Let’s be honest, a good beer is never good enough. The only perfect beers are bad beers that accompany the best times. That’s what UH is really about, having a good night and being able to do whatever makes you happy. The bar is less about the drinks and more about what the drinks create.  And I, Alexander, can live with that. 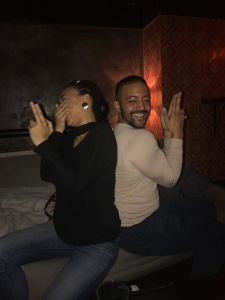 Suit the Occasion: By Brooklyn Industries

One thought on “Union Hall in Park Slope: The Choose-Your-Own-Adventure Bar”