New York winters are tame, well, at least they have been since I moved here. Of course, by saying this, I risk being called out by my gf (afrosty apartment is different, ok?). It’s cold here, sure. But after one or two blankets of snow, the streets clear and Brooklyn metamorphasizes back into the unique, beautiful butterfly that it is. New Yorkers jump to all types of conclusions when the weather hits above like 42 degrees.

Ipuddo’s Shoyu ramen, Raclette,  DOUGH donuts, and recently porridge, are my staples. At night, there’s nothing like a nest for drinks and sub-par trash talk about your roommates. The drinks are important, the trash talk is more important, but the place is, dare I say…sacred.

During one of the two snowstorms this winter, I find myself in the backwoods of Astoria, Queens leading two bankers to a promised land to spend stacks. In the snow, streets seem large, and avenues swell like rivers in the wet season. After a 25-minute walk (5 blocks) we arrive. We’re half frozen and red-faced, but safe in the log-cabin-in-the-city bar: the Bonnie.

Warmth sets the Bonnie apart. It’s like checking into a Finnish sauna for a couple of hours. Literally, the entire place is built of planks of wood. The four walls, the ceiling, the bar, the table–aka that shit is cozy af.

The people are friendly, the atmosphere is full of warm tones, and you can get some gooey, top-tier mac-n-cheese (with shells).  The ideal setting is in the afternoon, as it’s a place you can post up on a cold day, sip cocktails, nibble on finger food and forget about the dregs of wintertime.

To me, the decorative highlights include the spacing and atmosphere of the different sections within the bar. There are four distinct areas: a lively front bar,  a romantic parlor, an intimate back bar, and a spacious beer tent.  On that snowy day, it felt like a fortress, a respite from the desolate tundra of hipster Queens.

I make the distinction ‘Hipster Queens’, because for a beginner, NYC-Queens really has three different regions.  The 7 Train. Old School Greek-Italian Astoria. And Hipster Queens. (LIC is really an extension of Manhattan). Hipster Queens, to me, feels a lot like the ‘little Seattle’ of NYC. You can find great gastropubs, flannel-shirt people, content-with-where-they-are people, and good coffee, just like in Seattle.

Curiously, Astoria has some of the best restaurants, bars, and places that you’ll find in the city, but you won’t hear about them. The community is modest and close-knit.

Savvy dress-down clothes, a couple of lowlifes and a Saturday is what you need for the Bonnie. It’ll be great you tell yourself–

You may discover poignance in an afternoon where there is no place you’d rather be. Your mind becomes lucid and present. You unwind. You forget about the city life. You lose the concept of ‘waiting.’ Minutes become hours. You may ask yourself, how did I get here? The Talking Heads will play right as you ask yourself this question.

This is an Astoria day, a voice from the darkness tells you. Stay, another whispers, Stay with us. You begin to panic. The N train will be backed up, an uber ride estimate will show up on your screen as $50, Google shows the nearest option is a 40-minute walk. It’s dark. People’s laughter seems to turn towards you. It’s too late. You’re stranded in Queens. But it’s all good! 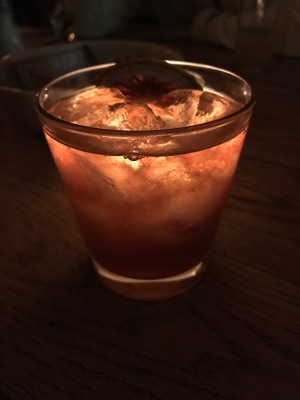 The drink menu is a stand-out, certainly one of the best in the neighborhood.  Elegant nuances and complex notes build off of classic cocktails like a well-composed jazz quintet. A large sprig of Rosemary rises from a highball glass.  A dried grapefruit ring drifts on the surface of a rocks glass. A stack of cinnamon sticks, a plume of mint leaves, a bouquet of basil, these arrangements hit you like a loverboy on Valentine’s day.

The cocktail director, Mike Di Tota is the romantic, and yes, he has a background in botany.

A Whiskey drink named: the Pursuit of Happiness, embodies the light, yet addictive sentiment anchored by a historic darkness. To me, the mix of Maker’s Mark, honey and pomplemousse juice is a tad too sweet. So, I rotate after the first, to a heftier drink called Winter Punch #2. Ironically, it is a whiskey drink with honey, and grapefruit (the same thing). However, it consists of a darker whiskey, a sprinkle of cinnamon, and a twist of lemon juice, which turns it into an aromatic affair. It’s spiced, well-mixed, warming, and what you need on a cold day.

Winter seems to have passed in New York, but the cold, bitter individuality remains in each of us–just kidding…Or am I? I have yet to see if the Bonnie turns into the lush-beach-resort-and-day-spa-in-the-city bar during the summer, but I can leave that to the immeasurable tiki bars that exist year-round.

Other Boutiques in Astoria: